Yerbusa 100% Guayusa is high-quality sourced Ilex Guayusa, an Amazonian plant native to Ecuador. Guayusa is a natural source of energy. Try it today!

Free EU shipping on orders over 70€!

Yerbusa: 100% Guayusa | From the tropics to your home

Guayusa is a tropical tree that is native to Ecuador. The leaves of this tree are used to produce an herbal tea known as Guayusa. This tea has been consumed by indigenous people in Ecuador for centuries and is gaining popularity in other parts of the world.

Guayusa is rich in antioxidants and gives sustained energy without feeling run down or jittery.

It has a smooth, slightly sweet flavor that makes it pleasant to drink.

How does guayusa work? How is it different from yerba mate?

Guayusa is a plant that is native to the Amazon rainforest. It belongs to the same family as yerba mate and, like yerba mate, can be brewed as an infusion. Guayusa differs from yerba mate in several ways.

Guayusa tea is recommended for its high concentration of antioxidants and caffeine. Guayusa also contains polyphenols, which have been linked to increased libido.

Overall, guayusa is a great choice if you’re looking for a drink that will help you stay awake and focused.

How do you brew Ilex guayusa Yerbusa?

To brew Ilex guayusa, you will need to use guayusa leaves. Once you have your leaves, boiling the water is the next step. Place the leaves in a pot of boiling water and let them steep for about 5 minutes. After 5 minutes, remove the leaves and enjoy your tea!

Is Yerbusa good for me?

Yerbusa appeals to people who live an active lifestyle. A natural substitute to traditional energy drinks and coffee, Yerbusa boosts your energy levels with tons of antioxidants, vitamins and minerals!

There are no reviews yet.

Only logged in customers who have purchased this product may leave a review. 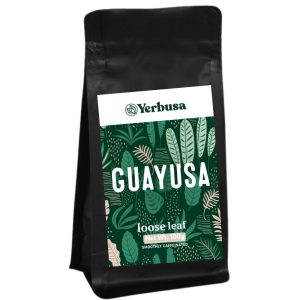